A new exhibition in Arles not only celebrates the Roman Army's military prowess but also delves into its back story and shows its ceremonial side in a display of splendidly decorated sports helmets, as Jonathan Coulston reports

Major exhibitions devoted to the Roman army and featuring military equipment happen very rarely. In Britain readers may recall one show at the Museum of Gloucester in 1987, which was succeeded only 30 years later by the extraordinarily successful, multi-venue Hadrian's Cavalry exhibitions, which were held simultaneously at museums along Hadrian's Wall, with local, national and international loan exhibits, lectures, a display of 30 'living history' auxiliary cavalry at Carlisle – and a themed conference. Now, the Musée Départemental Arles Antique is hosting The Roman Army: The Power and the Glory, curated by Katia Schörle (Brown University, USA).

The Arles museum, which opened in 1993, has one of the finest Roman collections in southern France. Housed in a building designed by the acclaimed Peruvian architect Henri Ciriani, it is intimately connected with the River Rhône, both in its proximity to the water, and in its content, which reflects Roman shipping, transport, bridging and other riverine and sea-going activities. Arles was a major entrepôt for military traffic, and southern Gaul provided many recruits to the Roman legions.

This is an ambitious exhibition which has drawn together a rich and varied collection of exhibits, made possible by the loan of artworks and artefacts from the Louvre and the National Archaeology Museum (MAN, St-Germain-en-Laye) in France, museums and private collections in Switzerland, Sicily and the UK, and, especially, from the Musée d'Art Classique de Mougins in the South of France.

Several striking watercolour reconstructions (three specially created for the exhibition) by the prominent archaeological illustrator, Jean-Claude Golvin, help the public to imagine soldiers and their building projects en masse. They are in Golvin's signature oblique-aerial style and depict a Triumph processing through the Roman Forum, army road-building and the construction of an amphitheatre outside a legionary fortress.

There have been a number of reconstructions of the Triumph but this one is unusual for its perspective, which really emphasises the mass audience of spectators crowded onto the terraces of basilicas, front steps of temples, and bleachers (temporary tiered wooden planks used as seating) lining the canonical route. The exhibition is divided into themes, which include: the Roman emperor as triumphant general; the infantry legion; the legionary and auxiliary cavalry; the military fleets; the army at war; life in military bases; and the modern phenomenon of military 'living history'.

Together, they give a well-rounded picture of war and peace, formal display and barrack life. They also convey something of the multi-cultural nature of the military community, which was not made up exclusively of male soldiers in a quasi-monastic environment, but was inclusive of all peoples within and without the imperial frontiers. Free men, freed men and slaves, soldiers, veterans, women, children, servants, grooms, traders and other service-providers all played a vital part in the Roman military milieu.

Interestingly, the exhibition also includes the fleets (classes) which were the spearhead of oceanic exploration, the suppressors of piracy, the suppliers of armies, the conveyers of emperors' households, and mobilisers of regional cultures. Recruitment of marines to the fleets drew heavily on the populations of Egypt, Syria and the Balkans. Yet, despite their importance, these forces are often sidelined or omitted altogether from general studies of Roman military affairs.

The Roman emperors were intrinsically military rulers, owing much of their personal security, position within society, governmental power and historical reputation to support by their armies. Soldiers were rewarded with regular pay, special cash gifts, military decorations and accumulated legal privileges.

Their loyalty was concentrated on the emperor as fellow-soldier (commilito) and his image was seen in portrait statuary in army base temples and on military standards, not to mention the heads on the coins with which they were paid. Even the least martial emperors, such as Claudius (AD 41–54) and Antoninus Pius (AD 138–61), felt they had to make some show of campaigning (often in wild Germania or remote Britannia) in order to garner military kudos. The apogee of this process was the traditional Triumph through the streets of Rome with marching soldiers, bound prisoners, war-booty, and the victorious emperor (triumphator) in his chariot as the central figure. So heady an honour and achievement was the Triumph, that only emperors were allowed them.

The exhibits include marble and bronze representations of war-gods, victorious emperors and private soldiers; infantry and cavalry helmets; swords, daggers and belt-components; personal jewellery; auxiliary discharge diplomas; and ship fittings. Each illustrates one or more of the exhibition themes, but they go further by introducing the visitor to several generally little-known facets of Roman military culture.

The helmets, though, are the real glory of the collection. Many are 2nd- and 3rd-century cavalry helmets designed to be worn with a metal mask. Highly decorated for display, these may be categorised as 'sports helmets', which were owned by the most skilled soldiers in cavalry regiments for use during exercises of horsemanship and marksmanship. These exercises are described by the Hadrianic governor, army commander and historian, Arrian (AD 92–175), and depicted on the gravestones of soldiers who wished to immortalise their own feats. Shooting with javelins or bows was practised at the gallop at targets, or at opposing 'teams' of horsemen. The masks present a menacingly unemotional, Classical face, but also had the practical value of protecting the rider's eyes from the blunt-headed missiles employed in training.

According to Arrian, these manoeuvres were known by Celtic names, reflecting the cultural influence of Iron Age Iberian, northern European and Danubian aristocracies, long recruited into the Roman cavalry. There is a modern assumption that the Romans were not great horsemen, but one particular strength of the empire was that it incorporated regions with a great range of martial cultures and military specialisations.

For waging war against Rome's equally varied enemies (Britons, Germans, Sarmatians, Parthians and Moors), commanders could mix-and-match different forms of cavalry regiments (alae). The European horsemen who were armoured, shielded, and used long swords (spathae), spears and javelins, were ubiquitous along the frontiers, but less numerous in the east. Other auxiliary cavalry regiments (alae sagittariorum) were armed with bows, bow-cases and quivers in the Levantine tradition, but not shields. These formations were present in all frontier armies, but were particularly concentrated in the eastern military provinces. A third type was represented by the shieldless regiments (alae contariorum) which wielded two-handed lances, following the Parthian and Asiatic nomad Sarmatian fighting style. Irregular, unarmoured Moorish cavalry (numeri Maurorum) were raised in North Africa and skirmished at speed purely with javelins. These different cavalry types could be pitched against opposing Moors in Africa, Sarmatians across the Danube, or Parthian horse-archers in the east. The tribal war bands of Germanic enemies were comparatively unarmoured, and thus especially vulnerable to missiles from fast-moving Roman cavalry.

Roman infantry, whether legionaries or non-citizen auxiliaries, were trained primarily in swordsmanship. Career-long exercise (between 20 and 25 years) built up endurance, strength and a peculiarly specialised musculature, allowing such men to outlast barbarian opponents through sheer stamina. Their fencing style and stance, and the weapons of their enemies, dictated the coverage and design of their armour. Two 'Weisenau type' infantry helmets in the Arles exhibition demonstrate an emphasis on protection of the neck and shoulders.

The sword and, more importantly, the military belt with its jingling metalwork, were the visual and aural signature of the soldier, symbolic of all the physical power, legal privilege and social position intrinsic to army service. They are prominently displayed on surviving military gravestones; Pliny the Elder describes their silver-plating which was for eye-catching effect.

Overt display of valuable metalwork was part of the bella figura of soldiers, as closely reflected in Roman literature and art. This, and the urge for individual warrior distinction in battle, explains why so much military equipment was heavily decorated. The helmets have embossed griffins, battle scenes, serpents and deities. The scabbards and belt-plates bear figural decoration following martial motifs and triumphal imagery. The wearing of finger-rings, was a special privilege granted to soldiers in the 3rd century. This was an army that glittered and flashed, twinkled and blazed in the sun, on the battlefield and in the street, striking fear into the hearts of barbarian enemies and Roman civilians alike.

Modern studies of Roman equipment have come a long way in dispelling some easy, traditional assumptions about decorative military culture, and thereby imparted a rather different view of Roman soldiers. Decorated equipment was not the preserve of high rank. Many pieces were produced by stamps, not as individual 'artworks', in copper alloy and tin, not silver and gold.

Decorated items were not just created for 'parade' in the modern sense, but were all practical pieces of armour and weaponry. Even the 'sports' helmets, worn within a specialised niche of display, were functionally protective. Soldiers did not tramp around the empire with several sets of equipment ('camp', 'parade', 'battle') and, because they owned their own items, they were free to embellish and decorate to suit their own taste. Most importantly, all the credible evidence indicates that equipment was manufactured within the army by soldiers. Craftsmen (and artists) working in military fabricae reflected their own cultural backgrounds through decorative art (Mediterranean Classical, European Celtic, Levantine Syrian), and created regional, local and regimental styles within the army.

This is a very different picture of the military experience: soldiers as artists and culture-bearers, not merely brutish, killing-machine grunts. The richness and variety of decoration also underscores studies of types and development of equipment over time. The firm conclusion is that, while there was a degree of functional and ergonomic conformity for, say, cavalry helmet protection, or infantry sword forms, there were no centrally ordained 'patterns' or uniformity. Roman soldiers were identified as 'military' by their arms, armour, belts and jewellery, and as belonging to their regiments by standards, inscriptions on equipment, and painted shield-blazons. They had no need of a 'uniform', as recognised in modern armies since the late 17th century.

All objects and the images are all courtesy of Musée d'Art Classique de Mougins (www.mouginsmusee.com).

Since the formation of the Ermine Street Guard (UK) in 1972, 'living history' for the Roman imperial period has grown into an international phenomenon. Groups now exist all over Europe and the New World, even in countries such as the Irish Republic, Poland and the USA, which never saw an ancient Roman soldier. Their work has been very valuable in carrying out practical trials of clothing, footwear, armour and weapons. In Germany they have even taken to the water in rebuilt craft of the frontier river fleets. It was fitting that a French 'living history' group, L'association légion VIIIe Augusta, opened the Arles exhibition with a re-enactment display, and they will present again when it closes.

The exhibition is aptly subtitled The Power and the Glory because it encapsulates themes of imperial triumph and naked, yet highly ornamented, military power. But it does far more than this by opening windows into the cultures, identities, tastes, skills and personal achievements of the individual Roman soldiers who celebrated, lived, loved and died at the height of the Roman empire.

On Show - the best exhibitions from around the world

Exhibitions from around the world 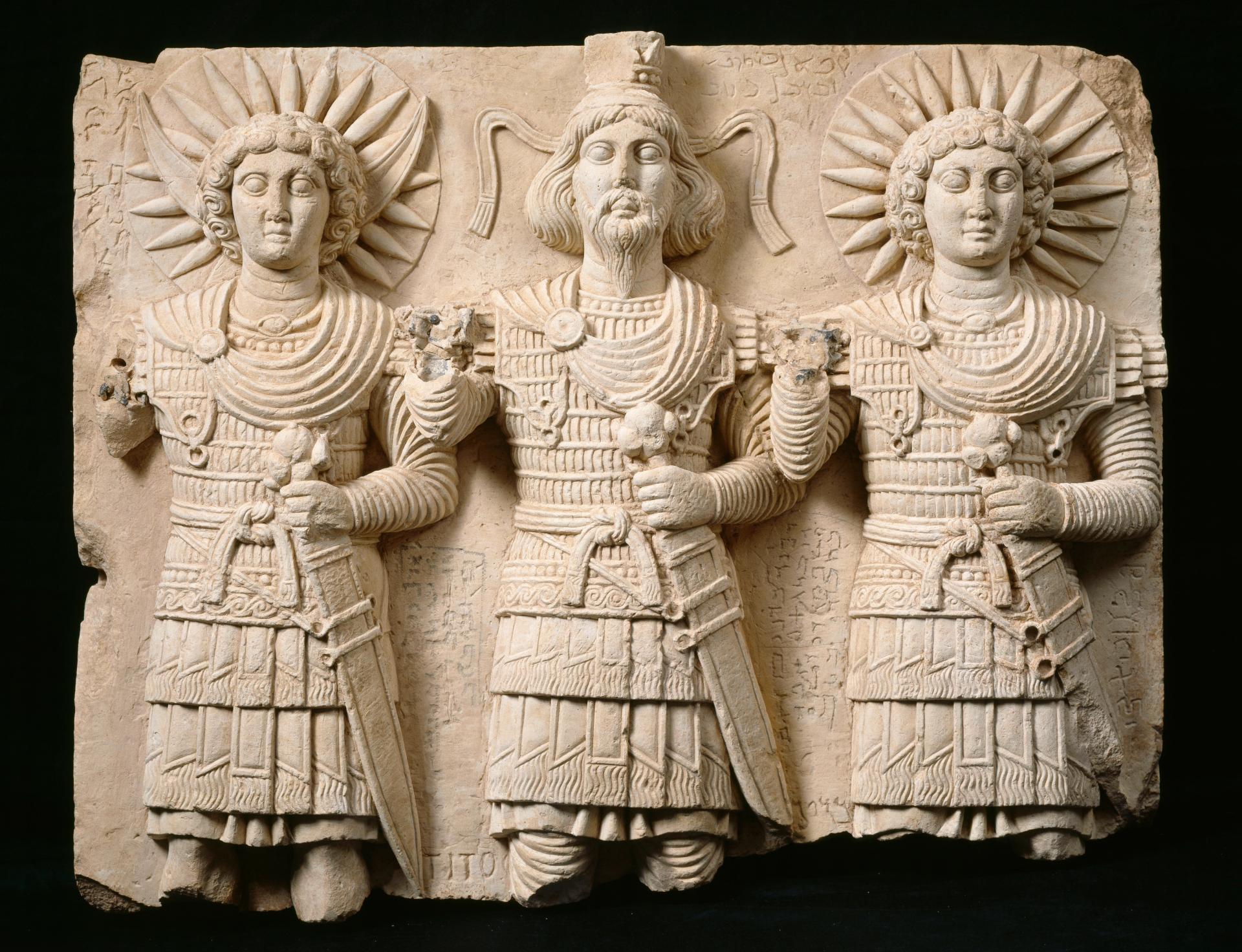 Art and identity: exploring the ancient Middle East in the age of the Roman and Parthian Empires

Blair Fowlkes-Childs and Michael Seymour, co-curators of a new exhibition at the Metropolitan Museum of Art that explores the ancient Middle East in the age of the Roman and Parthian Empires, take us on a fascinating journey visiting the cities of Jerusalem, Petra, Sidon, Baalbek, Palmyra, Hatra and Babylon en route